No stranger to the LTCare family of ministries: Reintroducing Mike Ferguson

Three years after launching Operation New Life as an outreach of Love Truth Care Ministries, ONL grew to the point that the board voted to establish them as a separate ministry. This created the need for their own non profit status, board, and Executive Director. Enter Mike Ferguson, who used his corporate skills to develop a strategic plan for fundraising, board development and expansion, and to manage ONL operations. He worked with us for three years and then launched out to use those same skills to help numerous small non profits define and streamline their operations. 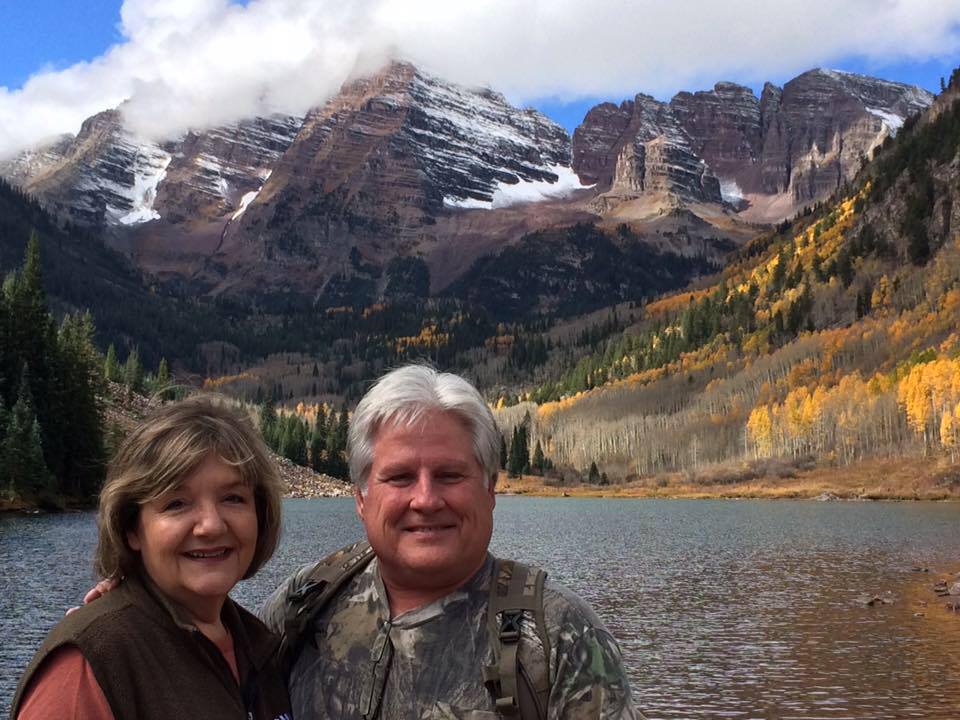 As of July of this year we are blessed to have him back on board to help direct MDM Honduras as we move forward in our second decade of ministry on the mountain. Mike will develop a strategic plan with Dixie Rosales and Juvenal Acosta, along with the Honduran volunteers and mothers, to replicate MDM’s model for transforming communities through education. He will also work with Francisco Alvarado to establish a five year plan for Economic Development on the mountain.

Stateside, he and board president John Turner are looking to expand the MDM Honduras U.S. board, and over the next 12 months he will take over U.S. operations. We anticipate with great excitement what God will do through the Honduras ministry team, our ministry partners, volunteers and our children sponsors, as we partner with Him to transform lives on the mountain, one child, one family and one community at a time.

Juvenal Acosta is the Director of Education for MDM Honduras. He began with us part time in 2005 when he went back to University to get his Masters Degree in Administrative Education. Completing his studies in 2008, he did his thesis on the ineffectiveness of the Honduras rural school system to prepare children for high school /career studies, and in 2011 became our full-time Director of Education. His dream was to design and create a program that would enable children from the mountain village to pursue higher education in the city. It was definitely a God-sized dream, because the rural elementary and middle schools only had classes in the morning, while children in urban areas attend a full day. In short, the mountain children received half the education of their counterparts in the city, but all were expected to complete the same curriculum when they reached high school. 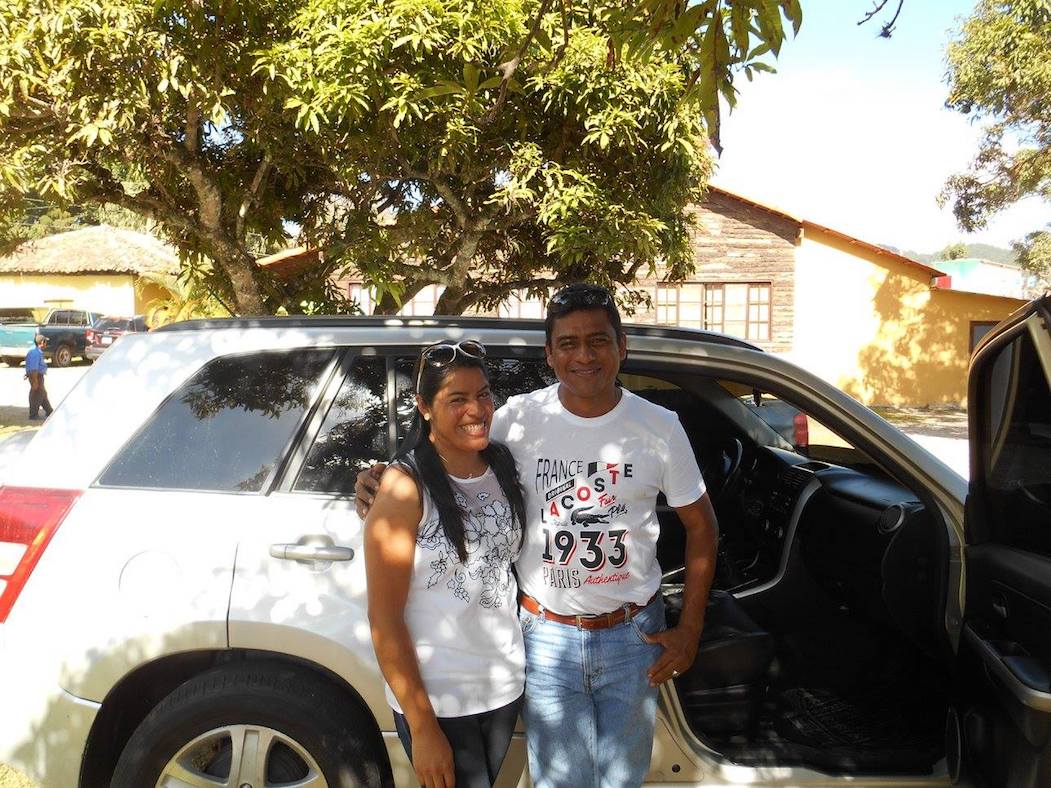 He wanted the program to be effective, economical and replicable, by empowering the community to serve their own children. After five years he, along with volunteer teachers from the community and Dixie Rosales, have a proven record of effectiveness with fifteen children currently going to the city for high school/career preparation, and three studying at the University. This is almost twenty times the national average for children who complete middle school. The model created was effective and economical, but could it be duplicated?

In February of this year the second part of the dream started coming true as MDM began to implement and adapt Juvenal’s principles in Molular, a small village about five miles up the mountain from MDM. See below for more on how God answered the prayers of so many.

Molular community school …the rest of the story 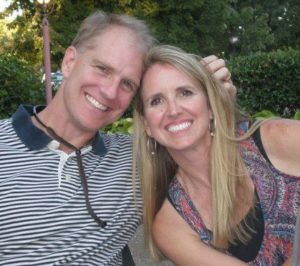 Dr. Mike Calfee and his wife Janet first came to Honduras with a surgical team, but fell in love with the mountain. In 2014 they began bringing teams from their home church, First United Methodist in Union City, TN to work with MDM. In 2015, while working on a new lunchroom for one of the area schools, Community Project Director Francisco Alvarado shared with him about the village of Molular, where a young teacher with 28 students served in a one room school-house that had a leaking roof and no electricity. After meeting the teacher and visiting the site… he began to dream.

His dream was to impact the community for Christ by transforming the school facility and grounds and helping the young teacher resource the school. 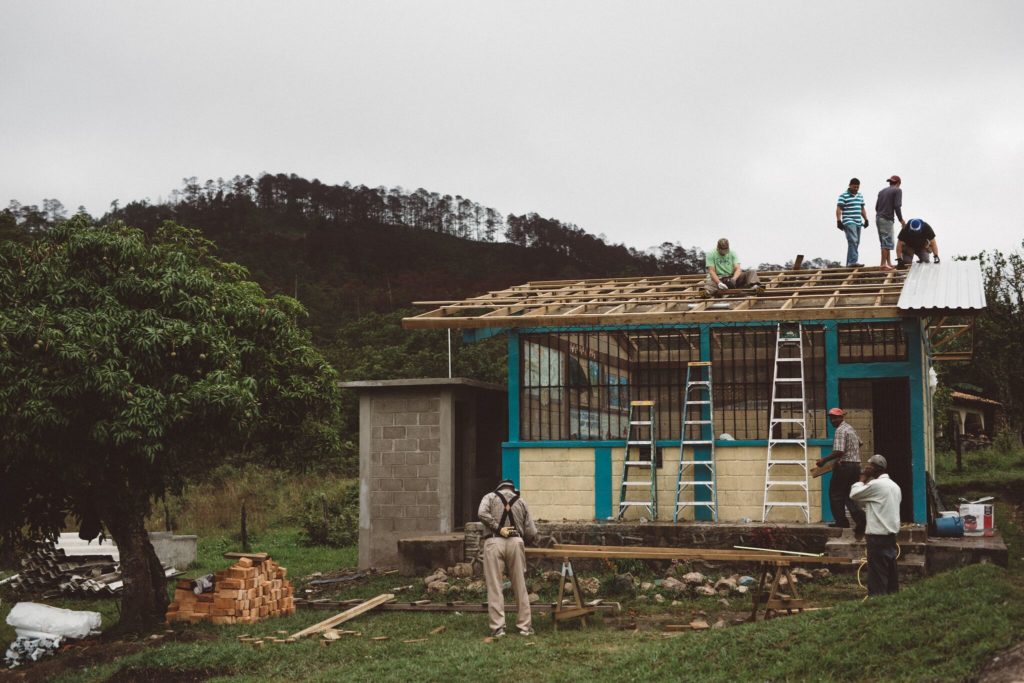 Work begins on the schoolhouse

Phase 1 ran electricity to the little schoolhouse and an abandoned building on the property, and provided funding for a vegetable garden with raised beds, built by local families. 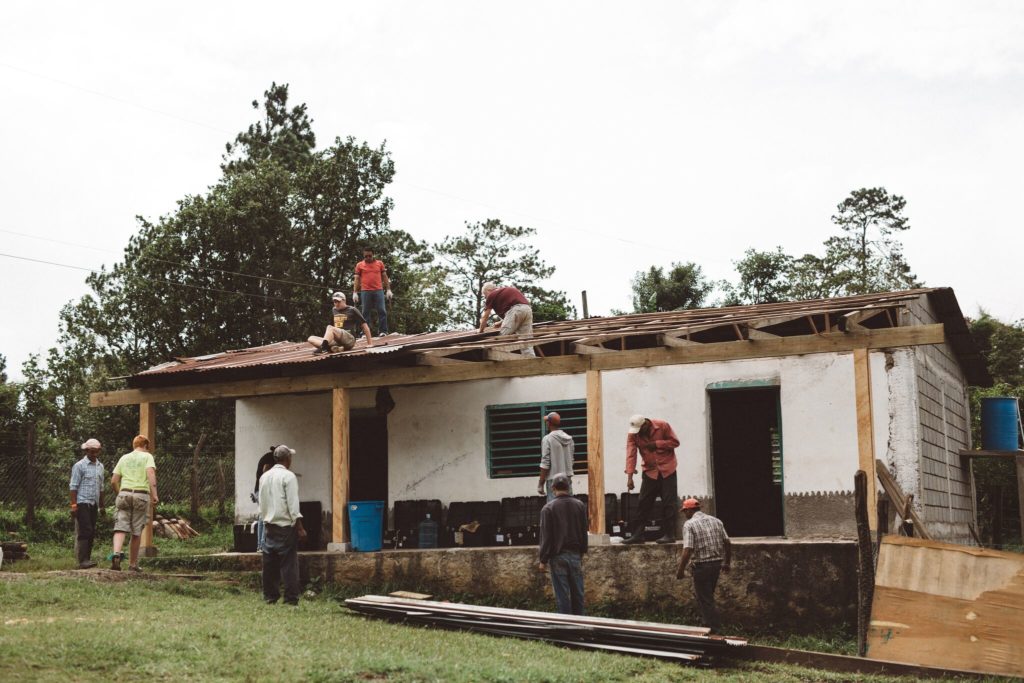 Abandoned building gets a new roof

In June of this year the team and community tackled the big Phase 2: roofing and painting both the schoolhouse and the building, refurbishing and painting desks and tables, remodeling the abandoned building into extra classroom and meeting areas, and even creating a kitchen area. If all that were not enough, the school got new bathrooms. What has been especially encouraging is the way the parents and others have stepped up and engaged with the team on projects. In April, men from the community donated their time to clear and level the soccer field, and in June the North Americans and their new Honduran friends finished and even landscaped the field.

Phase 3 starts next year with Union City funding and building a new playground, and then expanding their outreach to pour concrete floors and build and repair homes in the community. Thanks be to God! 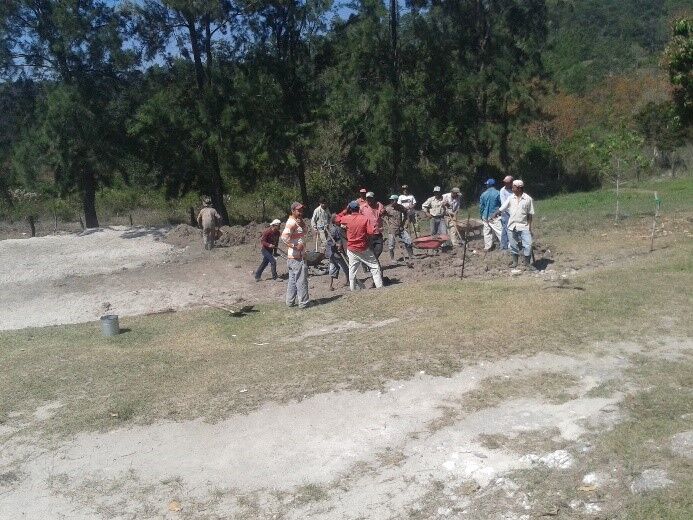 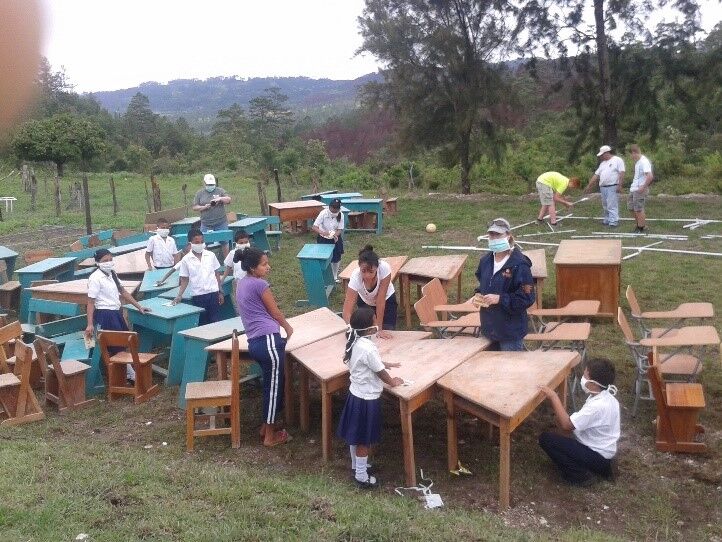 When God-given dreams converge… what a transformation!

In God’s perfect timing, Juvenal’s and Dr. Calfee’s dreams converged… and became reality, not just for them, but for the grateful families and children and young teacher. But buildings, paint, supplies, even electricity, are ineffective tools without someone to show the way. 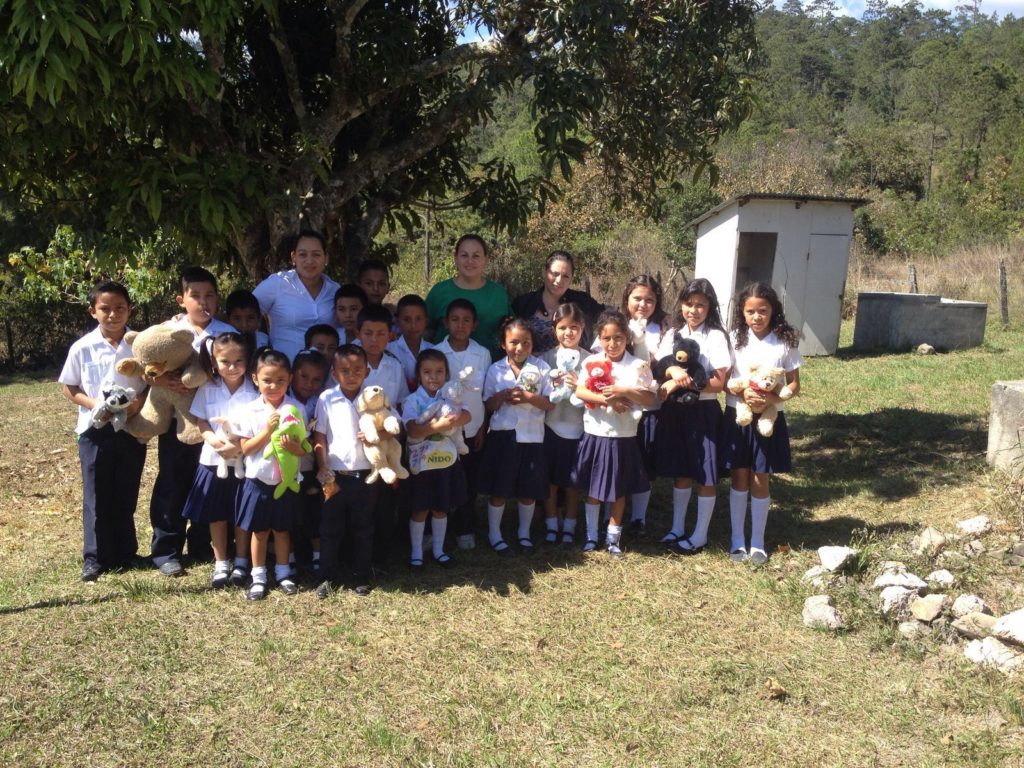 In February, Juvenal and Dixie sent Roxana Flores and Iris Borjas, our two best volunteer teachers from San Matías, to help Miss Jessika learn the MDM methodology, which includes spiritual formation as well as academic development. Every day they travel to Molular to use the God-given skills Juvenal helped them develop, to work with her so these children will be prepared—as will those who come after them—for the next phase of education. MDM San Matías even provided school supplies to the new program. 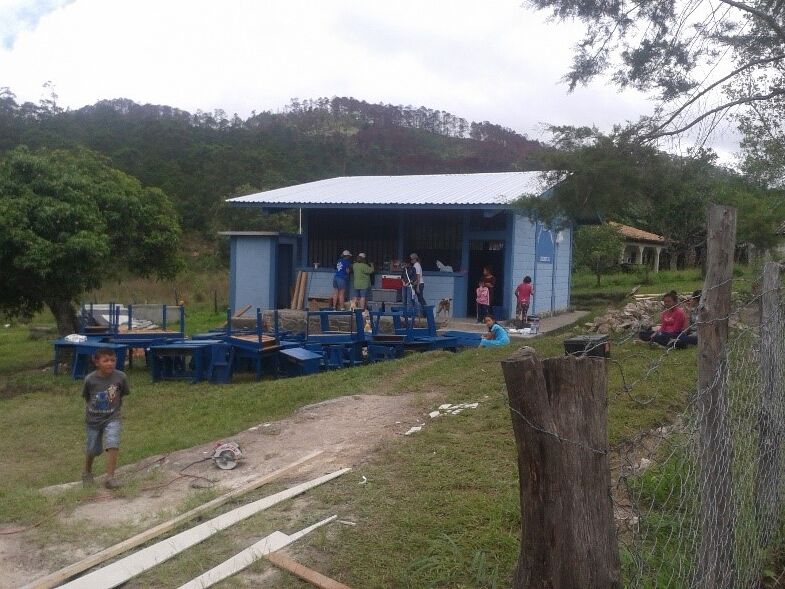 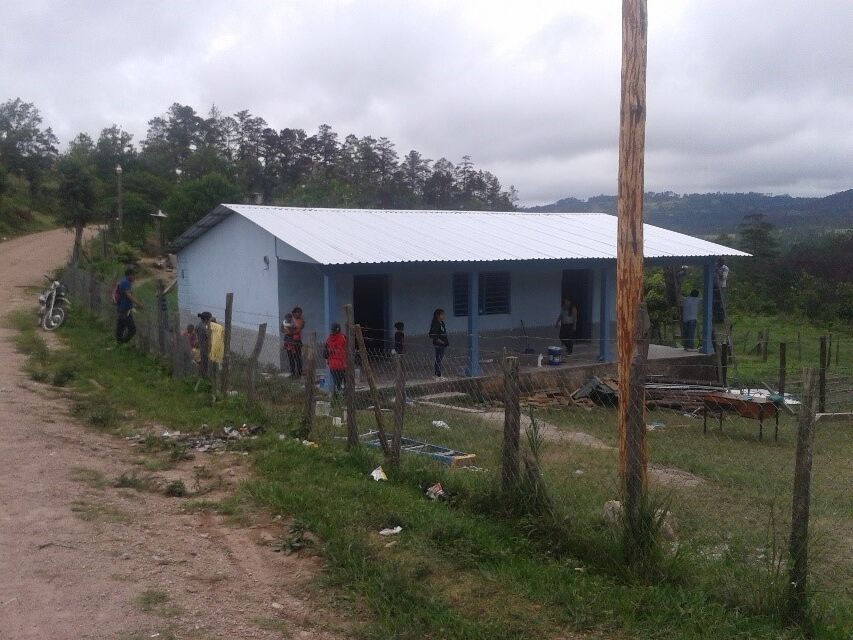 God had His hand on all this, but it is extra confirmation when you consider that the majority of the work – roofing and painting TWO buildings; new bathrooms; all furnishings scraped and painted; kitchen installed in the meeting/tutoring building; new sod and goals on the soccer field (used daily by the children and community) – was accomplished in just one week! 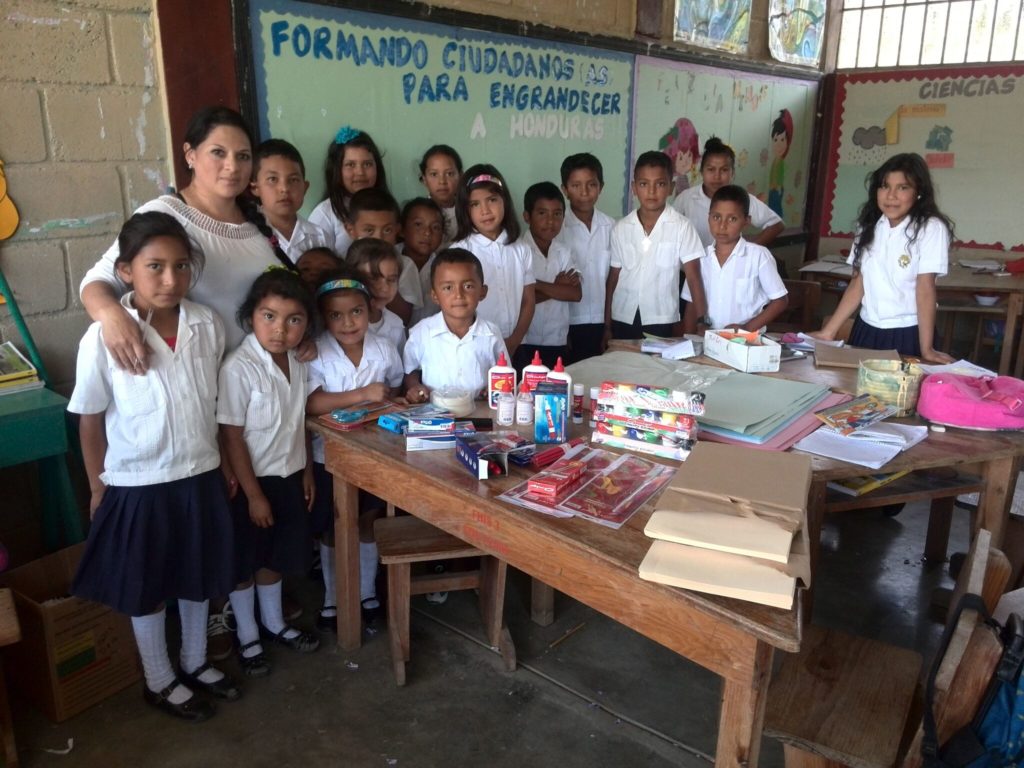 New supplies for the school year!

But God always blesses above and beyond what we can imagine. Besides the above, the team poured a concrete floor and painted a house near the school for a family in need, and provided new soccer goals for MDM San Matías. May HE receive all the glory. 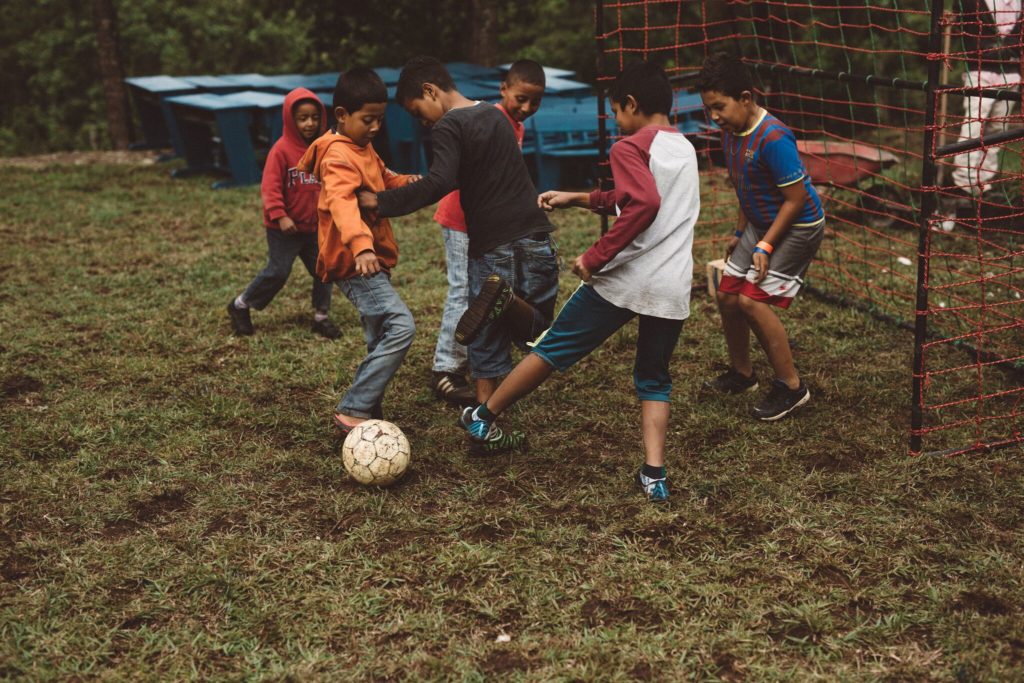 You Can Make a Difference!

MDM Honduras depends on your generosity to deliver the message of hope and empower the community in making godly choices. We can’t do this work without you. Join our community of donors; become one today!
Donate Today